In an ongoing effort to cover the globe, We are now tracking Adjarabet

We hope you like this new enhancement to SharkScope

Comments Off on Great News on Adjarabet Posted in Poker News

In our continuing effort to bring you the best product available we’ve updated the HUD. In the latest version you’ll find:

Reset Icons added to the overlay and the Reset Dates added to the statistics options so it’s now visible if a player has reset their statistics.
Support added for bwin.be and the Ongame room of Paradise Poker.

We are always looking to improve, please send your ideas to support@SharkScope.com

After some very hard work from our dedicated staff, tracking on the Merge network has returned. We do however regret to inform you that all data & stats that were missed during this downtime is forever lost..

We as a company want to thank all the visitors and subscribers for your patience and loyalty during the downtime.

Comments Off on Merge Tracking Returns Posted in Poker News

Posted on November 7, 2013 by realpokermd

The advanced search options in SharkScope keep getting more advanced! Just some minor additions this time, but they are still extremely powerful when used correctly. 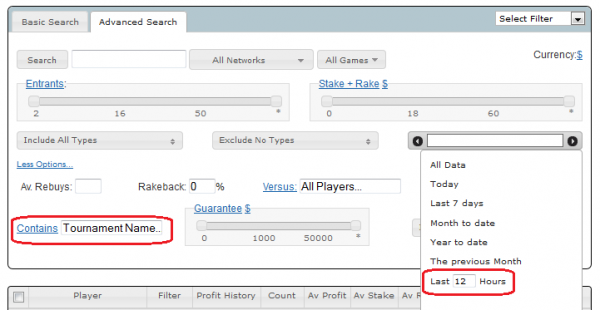 We’ve added a tournament name filter, so you can now answer such questions as what are my results like from just “SCOOP” tournaments. Or inversely exclude “Sunday Storm” related results from your statistics for example.

Another much requested change has been to allow you to enter a custom numbers of hours into the Last X Hours filter option instead of the previously fixed Last 12 Hours and Last 16 hours options.

Keep letting us know what you want and we’ll keep added the features…..

SharkScope has now added Guarantee and Overlay filters to its already extensive set of tournaments filters that allow players to view their statistics from specific tournaments and see upcoming tournaments.

On the player statistics page you can now view your results from tournaments which had a certain size guarantee or had an overlay on the tournament where a guarantee wasn’t met and the poker site had to add money to the tournament. Find out how much more money you make in these value tournaments.

Do these tournaments attract more novice players, further enhancing your profit or are they just attracting too many sharks, savvy enough to look for this extra value?

How big does the overlay have to be to increase your profitability by 50%?

These questions and more can be answered by the Guaranteed and Overlay filters.

These new filters also add extra to the tournament selector. You can now look for upcoming scheduled tournaments with the biggest overlays on all networks.

Using this you’ll never miss the biggest value tournaments on the internet and could massively increase your profit.

Comments Off on Hot Topic: Guarantees and Overlays Posted in Poker News

Yesterday,
Warren Karp the PokerMD interviewed mrGR33N13 who’s won over 1 milion dollars in SNGs so far this year
It’s a very interesting interview, with insights as to who mrGR33N13 is and how Dan Colman rose his way to the top of our leaderboards
You can find the interview at PokerMD.com/interviews or just click this link:
https://sharkscopers.com/category/interviews/

Going live today are new enhancements that will give you a clearer picture of a tournament player’s history, as it relates to MTTs

What you’ll now find in the “add other statistics” drop down are Average MTT finishes which will include by percentage “Early” “Early/Middle” “Middle” “Middle/Late” and “Late”. These percentages give you an edge in finding out what type of player you are up against. Do they take chances early, do they play tight and limp into the middle, and are they strong once they get late and other key indicators.

Soon to follow will be “Final Table Stats” which will tell you how a player does once they reach the Final Table.

SharkScope is always looking for new ways to help you find the sharks!
If you have any suggestions, please send them to Support@SharkScope.com

Thanks from Sharkscope for your continued support