“Sharks have always been interesting to the audience; that’s why the shark theme was used in so many books, movies and even slot machines.”

Sharks are scary, yet gorgeous sea creatures. Regardless whether you like them or hate them, their power can’t be ignored. Therefore, the shark theme is quite popular among authors, directors and even game developers. Aside from the huge number of shark movies that hit theaters across the world on regular basis, casino game creators have been surprising players with shark-themed slots from time to time as well. Therefore, as much as you want to play with these video poker bonuses, we advise you to first check out the best slot machine games that feature a shark theme and possibly give one of them a chance.

Named after the great white shark which people believe is a bit scarier than it really is, this SkillOnNet slot machine is extremely thrilling and entertaining. Even though there are only three paylines and three reels, making it resemble classic slots, this game enchants with its design. The playing screen is placed in a virtual slot machine that features a screen on top on the reels; on that screen, besides the game logo and the pay table, players will get the chance to see a great white shark peacefully swimming in the ocean. Even when you’re safe and sound on the ground, this video solely is enough to freeze your blood.

NextGen Gaming is a leading online casino games developer and the company’s slots always offer a unique experience. The same can be said for its shark-themed Shaaark! Superbet that will certainly make you scream in terror at least once per session. The game has two gameplays; the first one is standard mode and the second one is with superbet mode activated. Aside from the difference in the bet size and prizes, there’s a difference in the background as well. The second and the scarier option is to activate the superbet feature and dive deep into the ocean. There you’ll have a perfect view of people swimming in the water, fish passing behind the screen and, you guessed it, one very hungry shark.

Realtime Gaming is yet another developer that decided to come up with a shark-themed slot and we have to admit that their game is a little bit of weird. Even though this slot features the biggest number of sharks, it tries to depict a school where poor little fish and various types of sharks study. In addition, players will notice an angry octopus which is, in fact, the teacher. So, yeah, this is definitely a weird game. Nonetheless, sharks lifting weights, playing American football and acting like the rebel kids at school is a priceless view. Moreover, during the bonus games you get to see one of the sharks trying to eat the teacher. Creepy, right? 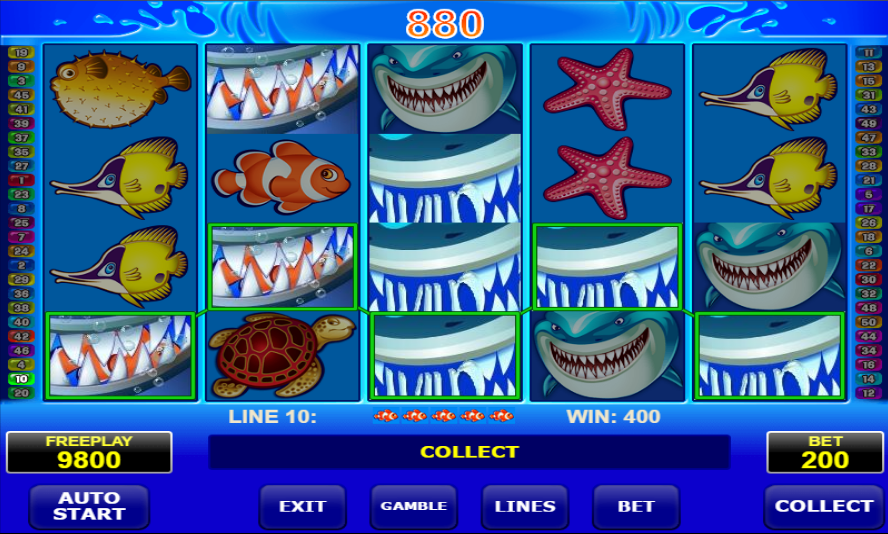 The very first time you lay your eyes on Amatic’s Wild Shark slot you’ll think it’s based on the popular animated movie Finding Nemo (2003). Nonetheless, even though the game does feature clown fish, giant turtles and scary-smiling sharks, it’s in a no way related to the blockbuster. This game is colourful, simple and pretty rewarding. Therefore, there aren’t really any reasons to avoid it. It features 5 reels and 50 paylines, meaning the chances to hit a winning combination are high. Be warned that every time the shark symbol is part of a winning payline the smiling teeth turn into the word “wild” in a very unexpected and disturbing way.

Novomatic is a popular game developer whose top theme is the high seas. Naturally, the provider didn’t miss the opportunity to launch a shark-themed slot, which is very fun in a very unusual way. This game has some features that have never been seen before like a person rowing a boat along the reels and then swimming around collecting treasure chests. The game is pretty rewarding if you manage to trigger free spins and if the shark doesn’t appear in order to ruin things for you. Therefore, no matter how much you like watching sharks in action it’s in your best interest to cheer for the Captain on this amusing reel machine.

We have to mention that Aristocrat has developed not one, but two Jaws-themed slots; the first one simply named Jaws and the second one Jaws – The Bounty Hunter. However, these are land based machines only and it’s extremely hard to find them in casinos across the US. Therefore, regardless their awesome design and thrilling gameplay, we couldn’t list them above.

PKR who has partnered with Sharkscope to give you money for your achievements continues in July and pays off big for those who played in June.

After paying out €2000 to the top 10 finishers, they held the freeroll for all other who qualified in the race.

Here are the money winners:

As you can see that’s an added €1500 and congrats to DrOnline for coming in first.

Have you joined the PKR Achievements Race? It’s never too late in the month and you’re always welcome. You play on PKR, we track the achievements and you win free money.

Sound simple? It Is! Here’s the details:

Not a player on PKR? Join Now!

The mysterious Canadian founder of PokerStars

Have you ever played casino games at Vegas Palms? This pastime is considered to be very controversial, especially in places like the United States. In fact, it’s safe to say that this industry has been through its share of upheaval – one only has to look at the story of PokerStars.com to see.

Interested in learning more? Keep reading for a look at the reclusive Canadian founder of PokerStars.

It wasn’t that long ago, on a yacht in the Mediterranean Sea, that a reclusive Canadian and an American Casino leader met to discuss joining forces. Together this powerful couple would join forces and begin the push to , it would begin to push for better gambling laws in the United States.

Isai Scheinberg, one of the founders of the popular gambling site Pokerstars.com, was aware that a large portion of his revenue stemmed from American customers, where this type of gaming is illegal. Always forward thinking, Mr. Scheinberg felt that if he pushed the envelope, he might be able to legalize online gambling in this huge market. But, before he began his journey, the savvy entrepreneur wanted to make sure that everything was done right. This was because, at this point in his life, he didn’t want to have to look over his shoulder.

This conversation was recounted by Steve Wynn, the founder of some of the most extravagant casinos in Las Vegas, because Mr. Steinberg is very guarded about his privacy. In fact, Mr. Scheinberg is so adamant about his privacy that he bought a house in Richmond Hill, aToronto suburb, almost 30 years ago, and is still in possession of that property today. But, if you go to his door to ask him any questions about his business, you will get no answer. He seldom returns messages either.

This is perhaps one of the reasons that many have never heard of the Scheinberg family. But, truth be told, they are what can be considered to be a Canadian success story. They are something like the Bronfmans, a Canadian family that made tons of money in the alcohol business during the US prohibition days.  In other words, they were able to take advantage of American laws and use them to their benefit.

Unfortunately, Mr. Scheinberg’s plans to change American gambling laws didn’t work out as expected. In 2011, 11 men that are affiliated with internet gambling, including Mr. Steinberg was charged with violating America gambling laws.

These charges were brought on right around the time that the current leadership of PokerStars, including Mark Scheinberg (Mr. Scheinberg’s son), were becoming more outspoken about their stance on American gambling laws.

This crackdown on online casino owners, like Mr. Scheinberg and others, wasn’t the first time that lawmakers in Washington have tried to control online gambling. But, this prosecution in 2011 was unprecedented. In fact, some said that it was so ambitious, it could be essentially be considered to be a declaration of war against the global casino industry.

The charges resulted in PokerStars losing a lot of money from millions of American customers, a number of TV contracts, as well as a partnership with Wynn Resort. Thankfully, their operations in other jurisdictions like in Canada and Europe, helped this company deal with the US shutdown, although in a diminished form.

What do you think of the Scheinbergs? Do you believe that Mr. Scheinberg should’ve been prosecuted? Share your thoughts in the comments section below, we are very interested in your opinion.