Posted on February 9, 2017 by realpokermd

Welcome Scopers to our Newest Innovation

Have you ever played in a tournament and wondered if two of your opponents were working together in some way? Have you ever looked at the performance profile of a heads-up player and think their record was too perfect to be possible? SharkScope has developed a sophisticated collusion detection tool that can help answer such questions.

Many of us think that there’s collusion in Online Poker, and in a few cases collusion is real. Fortunately, the security departments of online sites closely monitor for collusion, ridding us of the cheaters when they are found. Now, with SharkScope Collusion Detection, you can do some sleuthing of your own when you come into contact with suspicious behavior.
What is Collusion?

SharkScope defines “collusion” as the cooperation between players in online poker tournaments using communication and information-sharing outside the boundaries of normal online poker.   By communicating privately and sharing cards, two players can gain an unfair advantage over other competitors—this type of collusion is called team play. Another type of collusion is chip dumping, where one player purposely loses chips to another player.  Two players might engage in chip dumping, for example, if one person owns both accounts and wants to collect extra bonus rewards by opening more accounts and then consolidating money back into one account. 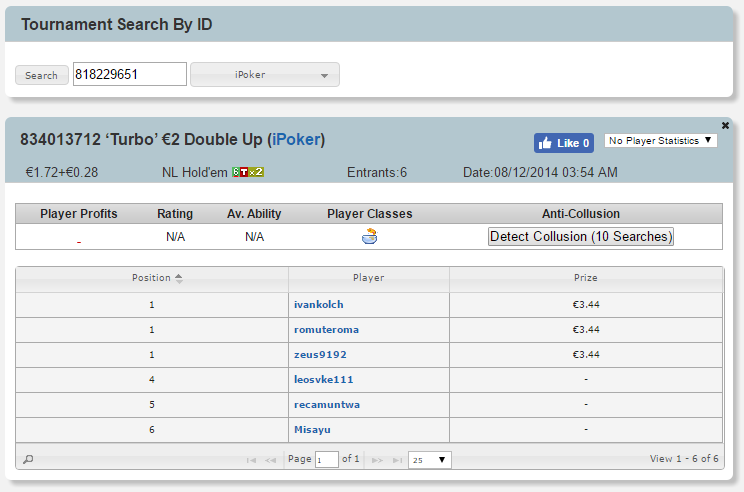 By examining the pair-wise performance characteristics of tournament participants when playing together vs. playing apart, we’re able to detect outlying results showing significant performance improvement when certain pairs play together–far beyond what would be expected by chance. It is important to note that we identify suspects for collusive play using indirect data—we can observe how much better players do when playing with specific individuals, but we can’t catch them “red-handed’; we have no way of knowing how the players may be communicating together and what information they may or may not be sharing.

For SharkScope subscribers, the process is simple. When accessing the results of a single-table tournament, a Detect Collusion button option appears. Clicking activates a process that finds possible collusion suspects and, if found, the option to report them. Once reported you’ll get a confirmation email, and we’ll then investigate the collusion claim and forward the relevant details to the poker site if it checks out. 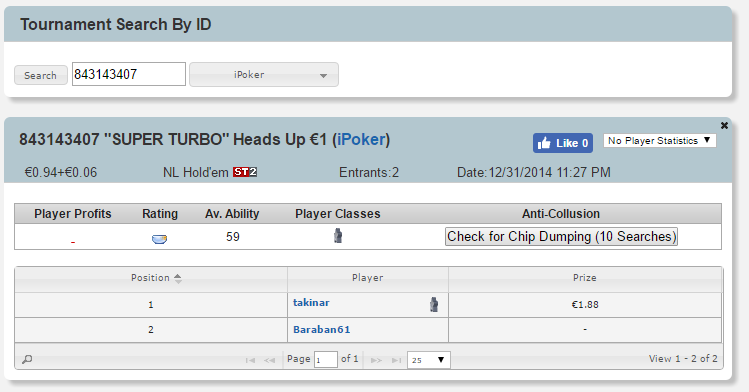 * There was no collusion detected in the above example.

Try it for yourself and feel more secure with SharkScope’s newest feature!

**As of now this service is limited to Gold subscribers and above. The cost for using the service is 10 searches.

The SharkScope Team, offering the world’s most accurate online poker data since 2004.