warren karp:(PokerMD) Hi marc (AznAllin0O7) thank you for joining us today to talk about Tournament Poker Edge and SharkScope and what they’ve meant for your career

marc: TPE and Sharkscope have both been very important in helping me grow as an online poker player. Playing is obviously very important, but studying off the felt is also very key in becoming a top notch poker player. Early in my career I was a sit’n’go specialist and SharkScope made it easy to spot the fish. Knowing who is beating the game and who is giving away their money is a huge advantage going into any game. TPE helped me plug a bunch of leaks in my MTT game which has resulted in some great success. From Preflop sizing to adjusting to villains opening range, TPE has been a blessing. With over thirty different professionals to choose from its impossible to find a style that doesn’t fit anyone’s game.

warren karp: As you know TPE is one of our advertisers, how did you find out about it? and how long have you been using them?

marc: My buddy was watching videos on TPE about two years ago after he saw an add on 2+2. I joined a year later when i decided to give up playing sitngoes and give tournaments a shot.

warren karp: So you specialize in both, is there one you prefer over the other?

marc: MTTS. Playing Sitngoes is a brutal grind. I remember 20 tabling Double or nothings in my pajamas just trying to make rent. All i needed was a 3% roi and than with the added rakeback i could hit my monthly goal. SharkScope helped me track this allowing me to know exactly what i was making per hour. I love mtts though and will never go back.

warren karp: So you started watching Videos and you’re obviously a quick study, when did you start making videos for them and become a coach/mentor?

marc: I was a member for around 6 months before i met Casey Jarzabek (aka Bigdogpckt5s) who took a look at my SharkScope graph on Pokerstars, and asked me to do a DON series for TPE. After my first series, he quickly talked me into playing mtts. I started watching all of the videos, taking bits and pieces from each pro to improve my game. I never looked back to sitngoes after starting mtts and TPE was the reason for this change.

warren karp: So you’ve mentioned our beloved SharkScope many times, in terms of what SS has done for you describe it for us in your own words

marc: SharkScope makes the game easier to beat. Anytime you have added information on your opponents you are at a massive advantage. Having the ability to filter someone’s stats per buy in is a massive tool in reading a player’s ability. It was also very important for me to track my own results and SS made that easier. I literally know what my hourly is in a turbo/non turbo for every buy in I play. Frankly, not using SS or TPE is a massive leak in a player’s game.

warren karp: One of the reasons we’re interviewing you is that you are atop one of our Leaderboards. “MTTs for Merge“. What does that mean to you and how hard do you think it is to get there and maintain it

marc: I would be lying if i said i didn’t wake up every morning and check SharkScope to see if I am still number 1. I want to be the best in the world and this is a small step towards that goal. Staying number 1 will not be an easy task as I am running incredibly above EV for the first 2.5 months and there are a ton of great players on the Merge network. Having said that, I work very hard so I expect results. A fellow TPE pro, Daryl Jace, has been coaching me this year and has had a massive impact on my game. With his help, I’m staying motivated and plan on staying a top this list. 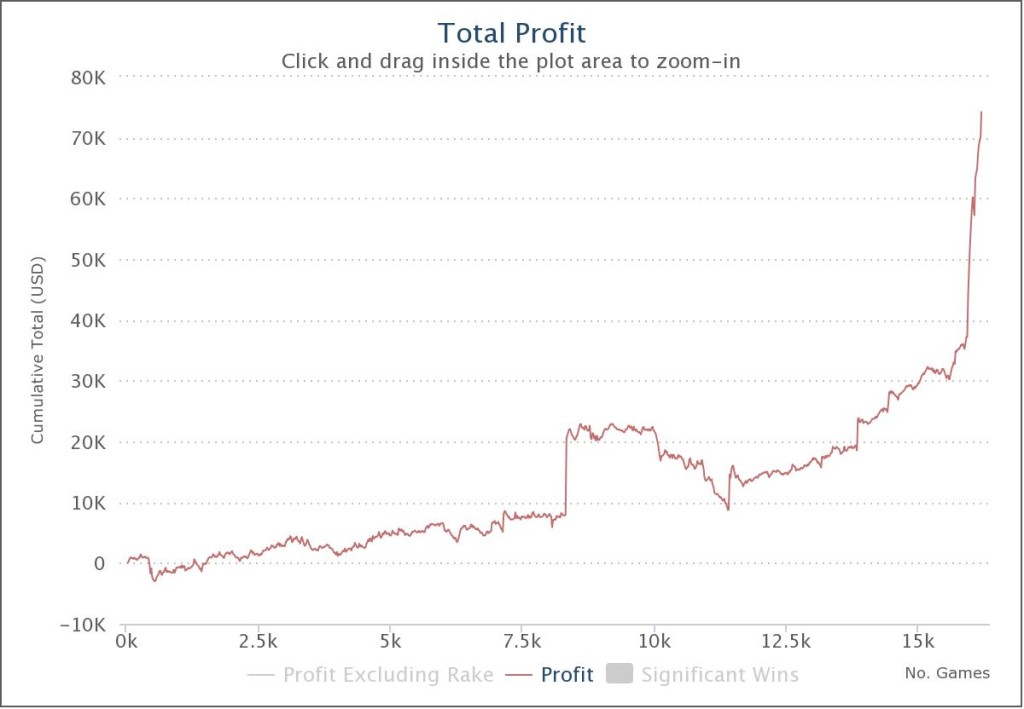 warren karp: I also notice that many of the pros on TPE play Live Casino MTTs, do you also transition into offline play?

marc: Oh yes, i take a two month “vacation” to Las Vegas every year for the World Series. The live grind is brutally slow, but i enjoy interacting with people and chasing the dream of winning a bracelet.

warren karp: Having played many live tournaments I’ve noticed that players very readily tell others their online screen name. Do you ever use iScope to get their stats?

marc: I have not used iScope but any application that allows me added information would be very useful. How does it work?

warren karp: iScope is an app that basically mirrors our search feature so when you’re out there in the trenches and can get a players screen name, you can do a search on them

marc: Amazing, i’m downloading on my iPhone as we speak.(Warren-Also in Android)

warren karp: This has been great, last thing can you tell me what your goals are for 2014 online and the WSOP

marc: Online- I want to stay number one on the Sharkscope leaderboard. My goal for the World Series is simple, ship a bracelet for the TPE nation!

warren karp: Ok marc, thank you very much for your time and continued luck in 2014! We’ll all now be watching the leaderboard so play good! LOL

marc: NO pressure now, hahahaha. Thanks for offering such a great product, my bank account says tytytytytytyty

Comments Off on PokerMD interviews Marc (AznAllin0O7) Posted in Interviews